BYD introduced its Type A battery-electric school bus to the United States in January, marking the company’s second foray into the North American market after it debuted a larger Type D model in 2021.

BYD is the world’s largest electric vehicle (EV) manufacturer, having delivered over 80,000 electric buses globally. In the United States market, BYD has deployed more than 700 vehicles – and the Type A is the latest BYD family member to join its commercial vehicle fleet.

The BYD Type A is designed from the ground-up to be an electric vehicle, meaning the chassis, structure, and components are purpose-built for EV transportation. There is no conversion, nor does BYD utilize third-party vendors for its chassis.

“By building our own chassis, we can better maximize the vehicle’s usable space,” said Jason Yan, director of sales operations of BYD North America. “Because the Type A is purpose built, we are able to have larger battery capacity, longer range, and more interior space for passengers.”

The bus is available in 26.7-, 24.6-, and 22.9-foot lengths, with passenger seating up to 30 and an optional wheelchair area. ADA-compliant wheelchair lifts with 800-pound capacity are also available.

The dashboard features a touch screen to provide drivers with detailed data and can be embedded with more software depending on district needs. 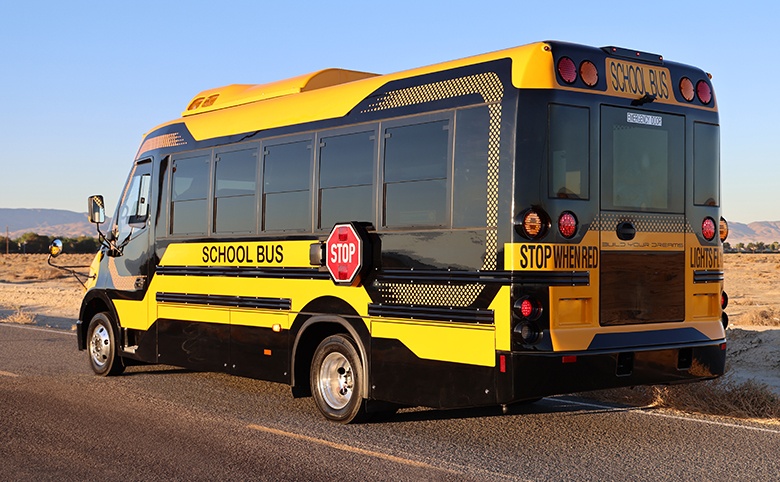 The bus is offered with two charging solutions, depending on need: 110 kw DC for high-charging power and efficiency, or 19.2 kw single phase AC charging. Yan said that BYD’s proprietary system can cut fuel costs up to 60 percent compared to diesel, and maintenance costs can likewise be reduced by 60 percent.

“Because the electric bus has fewer moving parts and a stricter design, it drastically reduces maintenance costs,” Yan said. “And with no engines, transmissions, or oil changes, the maintenance intervals are quite different as well.”

Safety was top of mind as BYD designed the Type A. The bus boasts a high strength steel construction body, electronic stability control, and an electronic braking system as standard features, and BYD said that the proprietary lithium iron phosphate battery is one of the industry’s safest in-vehicle power sources.

“The entire propulsion system is designed and produced by BYD, and we believe the data shows that our lithium iron phosphate battery has the industry’s safest battery chemistry,” Yan said. “Furthermore, our battery management system monitors performance, and collects error codes – in which case, it immediately notifies the operator. The maintenance and management team are also plugged in via an online portal.”

Each BYD bus is equipped with an automatic fire suppression system, and 3-point lap-shoulder belts by HSM are available for districts that require restraints.

The cockpit is designed with driver safety, comfort, and ergonomics in mind – including a 16.5-inch power steering wheel and telescopic steering column, comfortable seating, and an interactive dash control system.

Test Driving the BYD Type A

The Official School BUSRide Road Test was conducted around Lancaster, California, home to BYD’s massive manufacturing plant. The facility encompasses over 500,000 square feet and it has delivered more than 700 vehicles since production began in 2014.

De La Riva did not have much experience driving EVs before the Type A test-drive, having only previously driven a full-size BYD public transit bus on a demonstration.

“We run a lot of Type A vehicles, mostly serving the Palmdale area,” he said. “Our larger vehicles handle the longer runs, even down into the Burbank area, and sometimes our Type A buses will make trips out of town as well.”

Stepping into the cockpit, De La Riva commented on the high-visibility of the larger windshield, as well as the touch-screen driver interface.

“We use tablet-based systems on our buses, but they’re from a separate vendor,” he said. “They’re not integrated into the bus, like on this BYD vehicle. It looks like the dash itself has less switches than some of our buses, so I think it would be pretty easy to train our drivers on using this bus.”

“I notice that I’m sitting much higher than in our own Type A buses,” he continued, “but it adds to the visibility for the driver.”

For the initial phase of the test, De La Riva drove the bus out of the BYD facility lot and into Lancaster’s industrial and auto sector. With a fair amount of morning traffic and several red light stops, he was able to feel out the vehicle’s acceleration, braking, and street handling.

“The first thing I notice is the sound – it’s much different from a diesel bus,” he said. “It’s very quiet, and the sounds that I can hear are similar to a quiet passenger train taking off from a stopped position.”

“It reminds me a bit of some of our own Type As, and we take those into neighborhoods all the time – turning around in cul-de-sacs, and making tighter maneuvers,” he continued. “This bus seems to have a pretty good turning radius, so it would be ideal for those in-neighborhood Palmdale routes.” BYD representatives noted that the bus has a 25.9-foot turning radius, confirming De La Riva’s observation.

At the red lights, De La Riva noted that the bus has a smooth stop/start action. He mentioned that the braking would require some adjustments to his driving style, as he was not used to braking in an EV.

“The braking is very responsive – almost too responsive for how I am driving,” he said. “But that’s a simple adjustment, just like any other new bus that would join our fleet.”

Next, De La Riva drove the bus onto the southbound highway headed toward Palmdale. The BYD Type A has a 65 mph maximum speed, and De La Riva pushed the vehicle to its upper limits.

He noted that the ride stayed exceptionally smooth and quiet at highway speeds, with a distinct lack of rattling or vibrations found in other buses at the same speeds.

“The bus does hesitate a little bit to ‘get up,’ and there is a bit of a delay when taking off from a stopped position,” he said. “That said, I’m sure it’s typical for electric buses and I need to adjust my own driving. But this bus is handling really well on the highway.”

After spending the better part of an hour in the Palmdale area, De La Riva returned the bus to the Lancaster facility and gave his final impressions.

“While drivers in my fleet would need to make adjustments for EV driving, I must say the bus handled very well overall,” he said. “It’s always a matter of training when you purchase new buses, but I really liked how the bus handled on the highway and in the tighter neighborhoods where I see it working best.”

“I got used to the braking and had adjusted by the time we finished driving,” he said.”

“The cockpit was very nice,” he continued. “That big windshield was great for visibility because the pillars didn’t block my view at all. The seating was comfortable, and I had no trouble reaching any of the necessary controls or systems.”

Perhaps most important for districts looking to make the EV switch: the BYD Type A features vehicle-to-grid (V2G) technology, meaning that the bus can provide extra power storage to districts when it is not traveling on a route. The Type A bus bi-directional charging capability means buses can be charged overnight when energy demand is low, and emission-free energy can be fed back into the classroom during school hours when the bus is parked.

“The key technology for the pupil industry is really the V2G,” Yan said. “Because of the unique operations of a school bus, they operate in the morning and the afternoon, but in between there is a six or seven-hour window when the bus is parked in the yard, totally inactive. So, to have the bus charged at the off-peak rate and feed the grid at the peak time, that is the most important thing – especially for a large fleet.”

“When the bus is parked, its battery is really a big power bank,” he concluded. “Whether it is releasing more power to a school during the day, or even being utilized to provide power for affected areas during a natural disaster…it’s a game changer.”